Hot weather is dangerous to health, sometimes resulting in death. Heat-related deaths are preventable. In this second annual report on heat-related mortality, the Health Department examined data from 2011-2021.

This report’s findings are similar to last year’s report.

The Health Department examined heat-stress deaths occurring during the warm season months of May through September from 2010-2020. We reviewed death certificates and medical examiner investigation reports in cases where heat was recognized as a cause of death. A more detailed description of methods and data sources can be found here.

Among NYC residents, there were 96 heat-stress deaths over the 10-year period. There was an average of 10 deaths per year, with the largest yearly numbers of deaths occurring earlier in the period as a result of severe heat waves. Most deaths occurred in July (75%) and August (13%), followed by June (8%), May (2%) and September (2%). As of March 2022, there were 4 heat-stress deaths in 2021, though that number is provisional and subject to change because mortality records are not finalized. 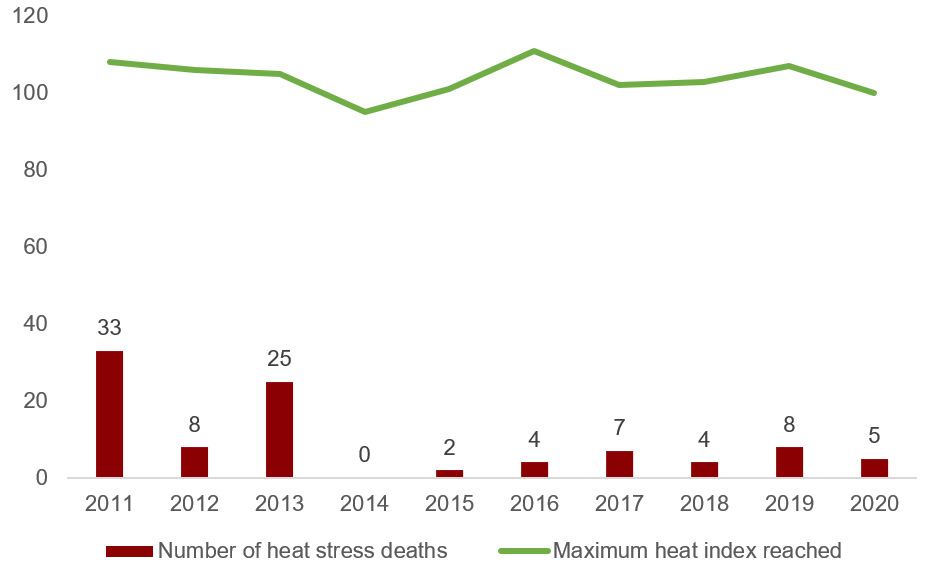 Notes: The number of heat-stress deaths for 2020 is provisional. If additional deaths are certified as caused by heat stress the Department will update the number in future reports. Weather data is from the National Weather Service LaGuardia airport station. Heat index is a measure of air temperature and humidity. 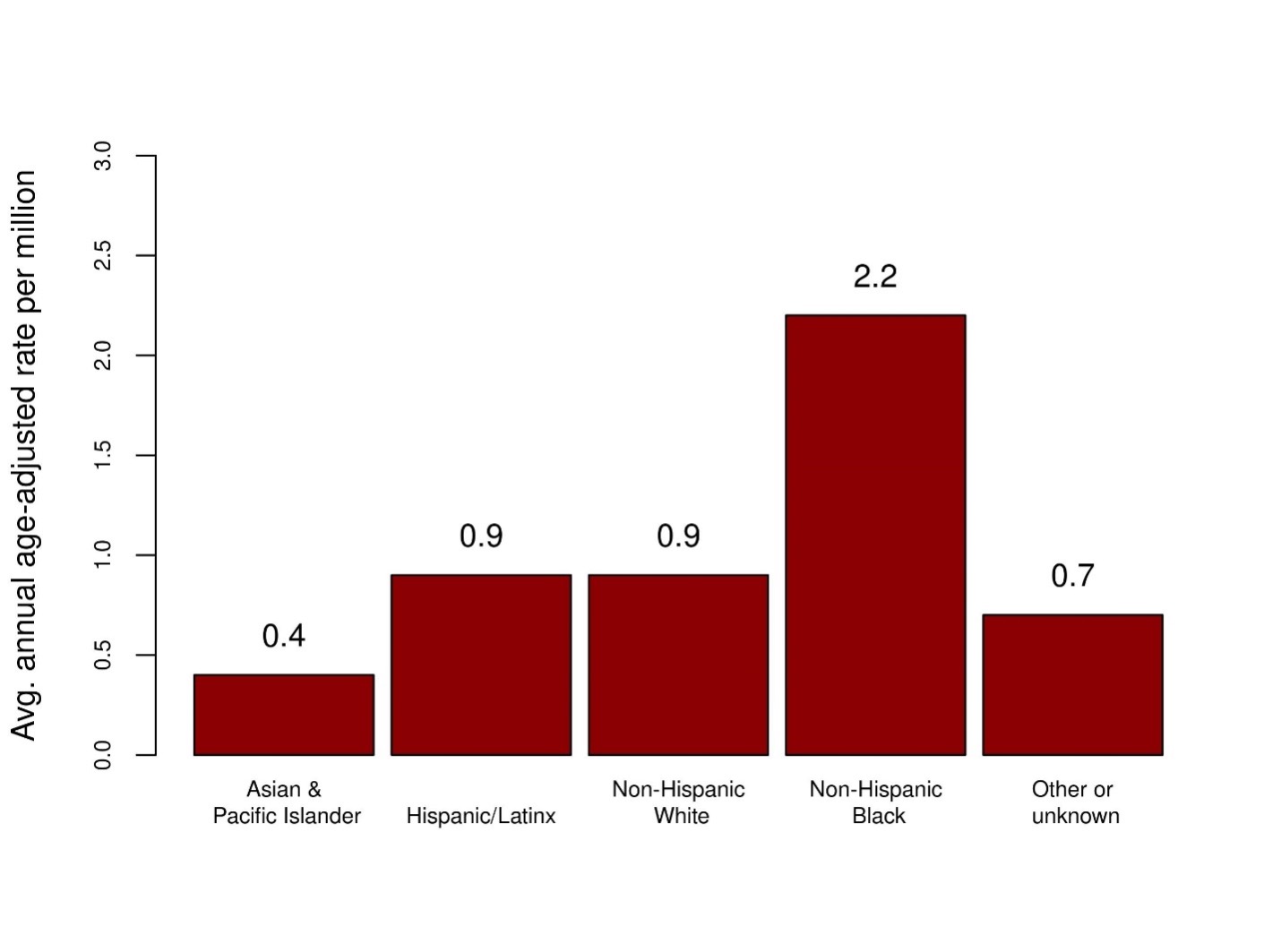 Deaths are grouped into these five race and ethnicity categories due to the small sample size of deaths and the availability of denominator data. However, these categories represent an oversimplification of the ethnically and racially diverse population found in NYC. People identified as two or more races or races/ethnicities not listed here are included in the other or unknown category, and the Hispanic/Latino category includes people of any race. Differences in mortality rates among racial and ethnic groups are due to long-term structural racism, not biological or personal traits. Structural racism — centuries of racist policies and discriminatory practices across institutions, including government agencies, and society — prevents communities of color from accessing vital resources (such as health care and healthy housing) and opportunities (such as employment and education), and negatively affects overall health and well-being. See Appendix Methods and Supplemental Data for more information on numbers and percentages by race and ethnicity.

* Based on residence unknown in death death certificate. 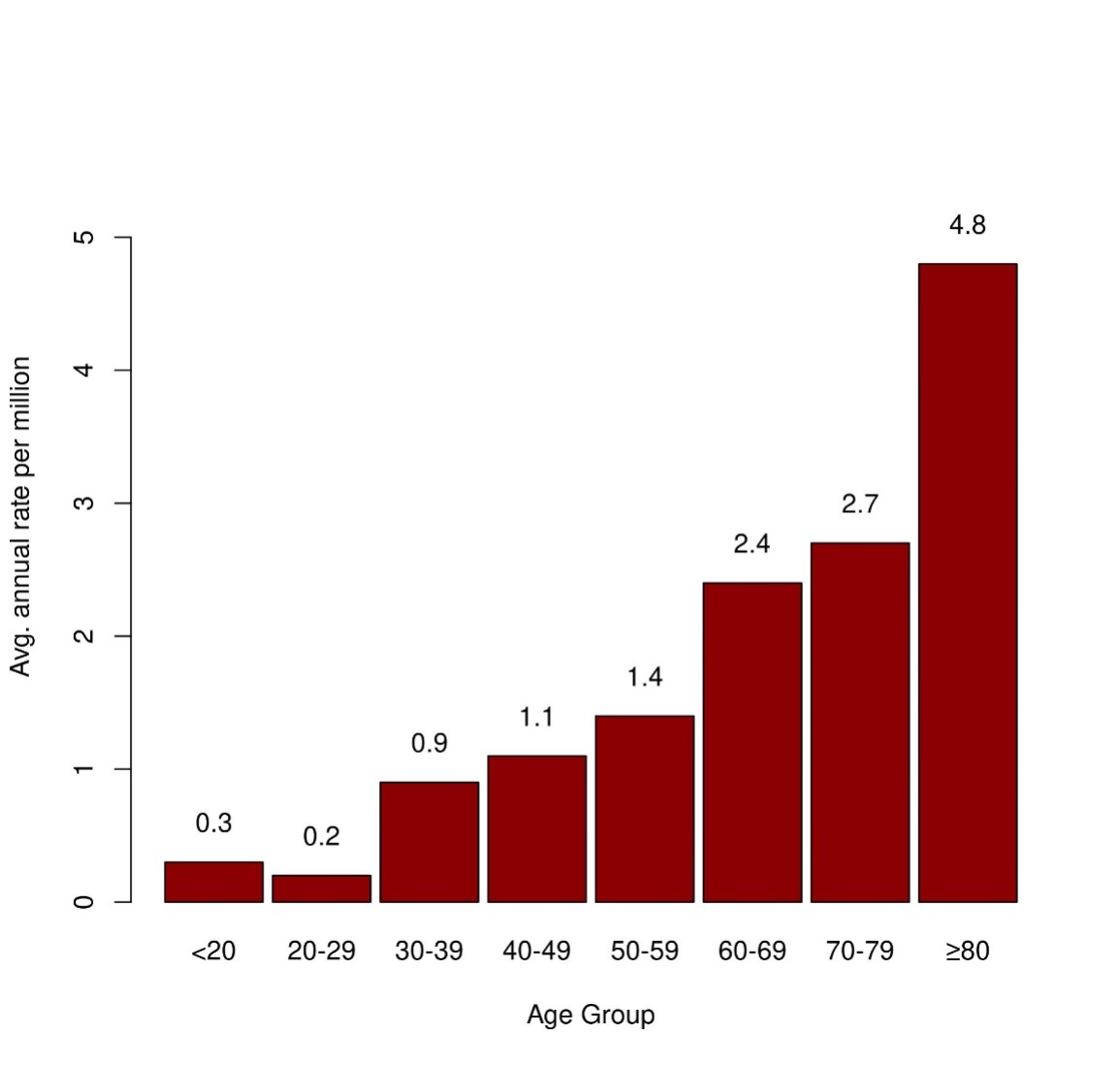 Health and other risk factors

People who died from heat-stress were most often exposed to dangerous heat in their homes (69%, n= 57 of 83 records with detailed information). Another 7% were exposed indoors but not at their own residence. Without AC, indoor temperatures can be much higher than outdoors, especially at night, and can continue for days after a heat wave.2

Among New Yorkers who died after becoming dangerously hot at home, and for whom there was information about the presence or absence of an AC, 81% had no AC and the rest had AC that was either not working or not in use.

More than a quarter (n=16, 28%) of decedents had an electric fan present and on, indicating that only using an electric fan without an AC cannot always prevent death during extreme heat for people who are at highest heat risk.

Previous Health Department studies have found that air conditioning access differs across race and class. Black New Yorkers and low-income New Yorkers are less likely to own or use an AC during hot weather, and the main reason is cost.3 While more than 90% of NYC households have air conditioning, access is also lower in neighborhoods where more people are living with limited financial resources. 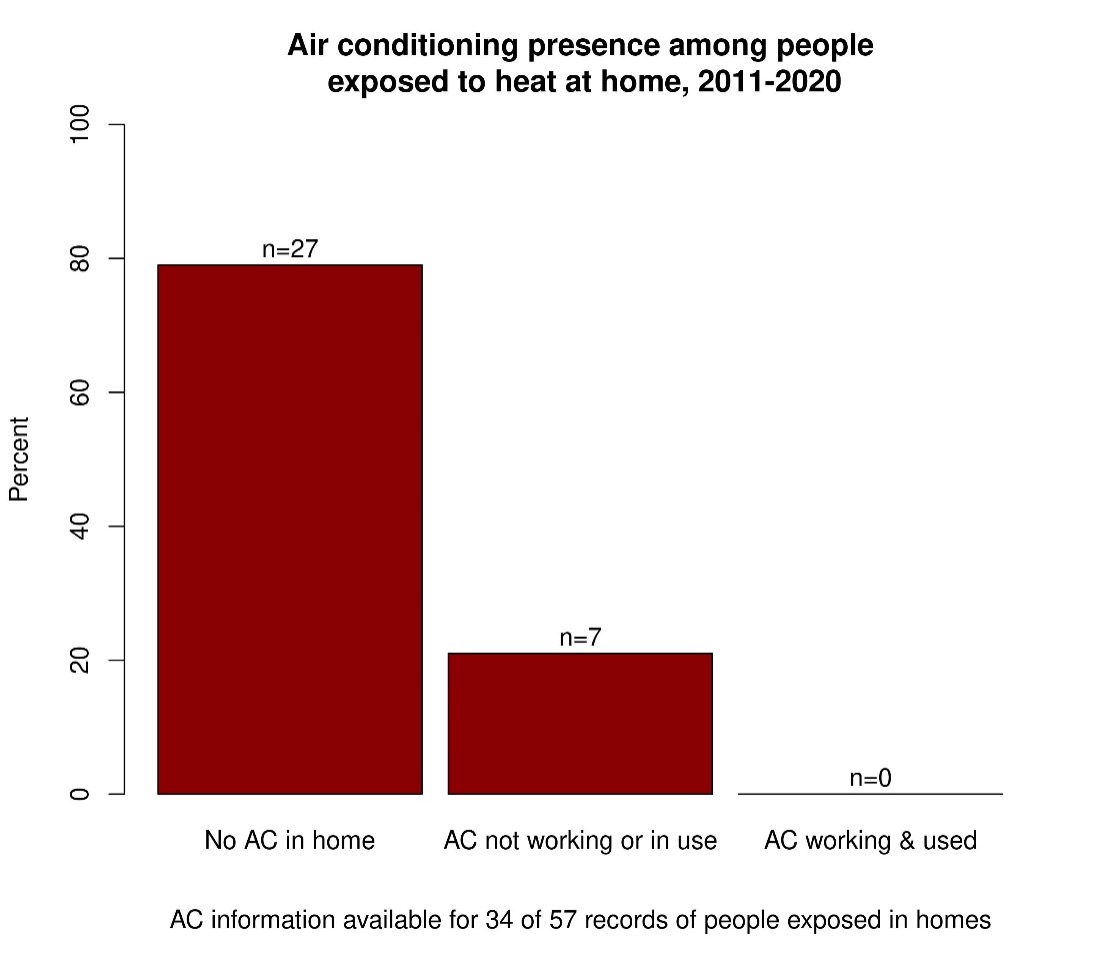 Deaths from chronic conditions that are not recognized as heat-related on death certificates can be estimated using statistical models. There are more of these deaths than those from heat stress and they are called “excess deaths” or “heat-exacerbated deaths.” Unlike heat stress deaths, which can be identified and investigated, excess deaths can only be estimated as aggregate counts. However, estimating heat-exacerbated deaths – or “mortality” – better captures how many people are dying of the heat.

We estimated heat-exacerbated mortality risk and number of deaths for 2011 through 2019 using weather and natural cause death data for May-September in NYC. The average natural death count was about 18,000 deaths for May through September each year. We used statistical models to compare deaths on hot days with those on cooler days. We estimated heat-exacerbated deaths using:

In addition, to describe the impact of climate change, we examined how the number of hot days during warm months changed over the past five decades. We included deaths occurring on the date of exposure to hot weather and over the following 3 days, because previous Health Department studies have shown that heat-related deaths can occur up to 3 days after the initial hot weather.4 Detailed methods used to estimate risks and attributable deaths can be found here.

Hotter Summers: The proportion of summer days reaching hot temperatures has substantially increased in the latest decade compared to the earliest of the past five decades (Figure 4). More than 20% of late June through mid-August dates during 2011-2020 had daily maximum temperatures of 90°F or higher. More than 30% of Mid-July dates experienced daily maximum temperatures of 90°F or higher. Given the consistently high and increasing proportion of hot days between late June through mid-August, heat-risk mitigation planning needs to emphasize non-emergency planning, such as access to air-conditioning. 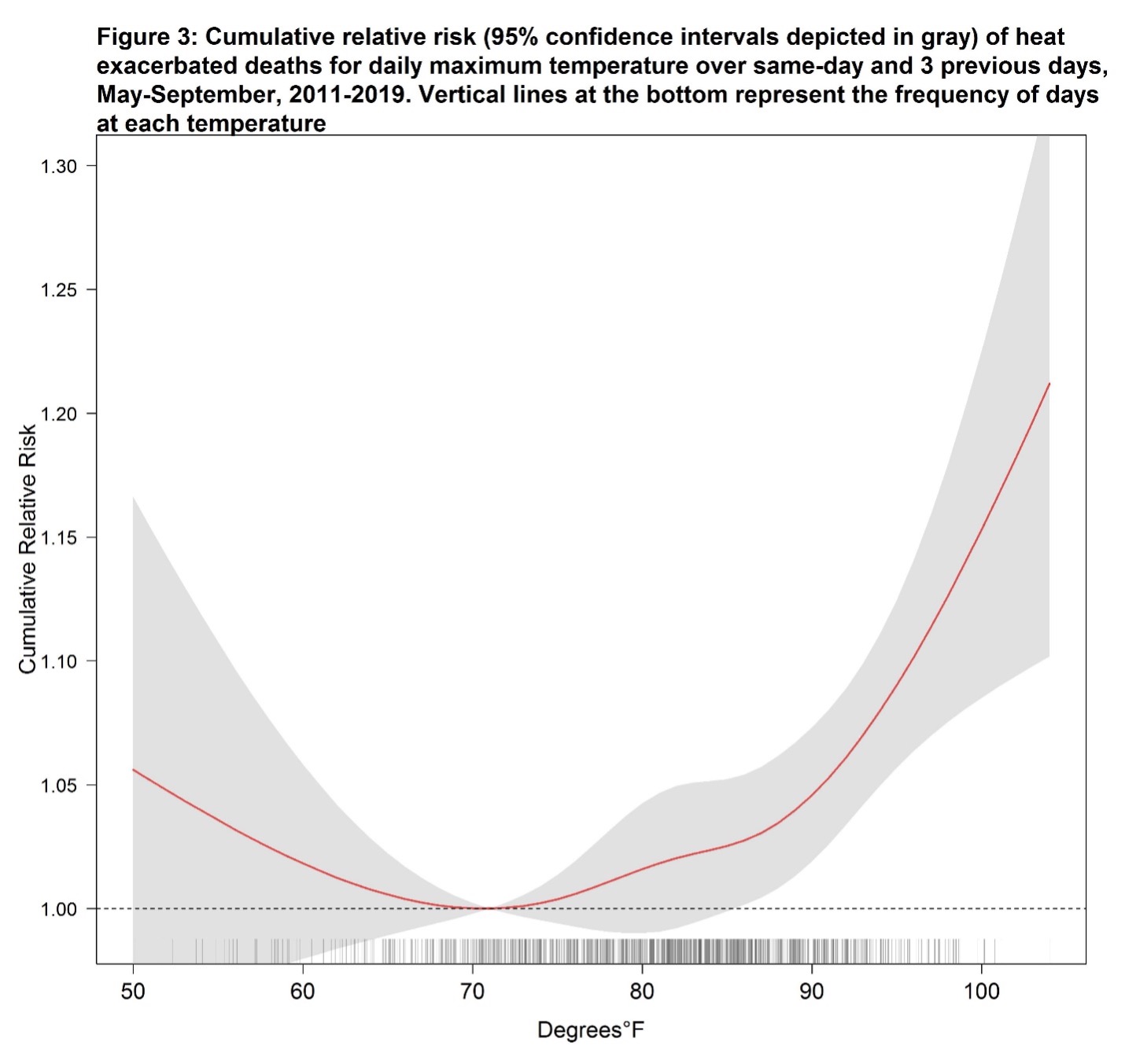 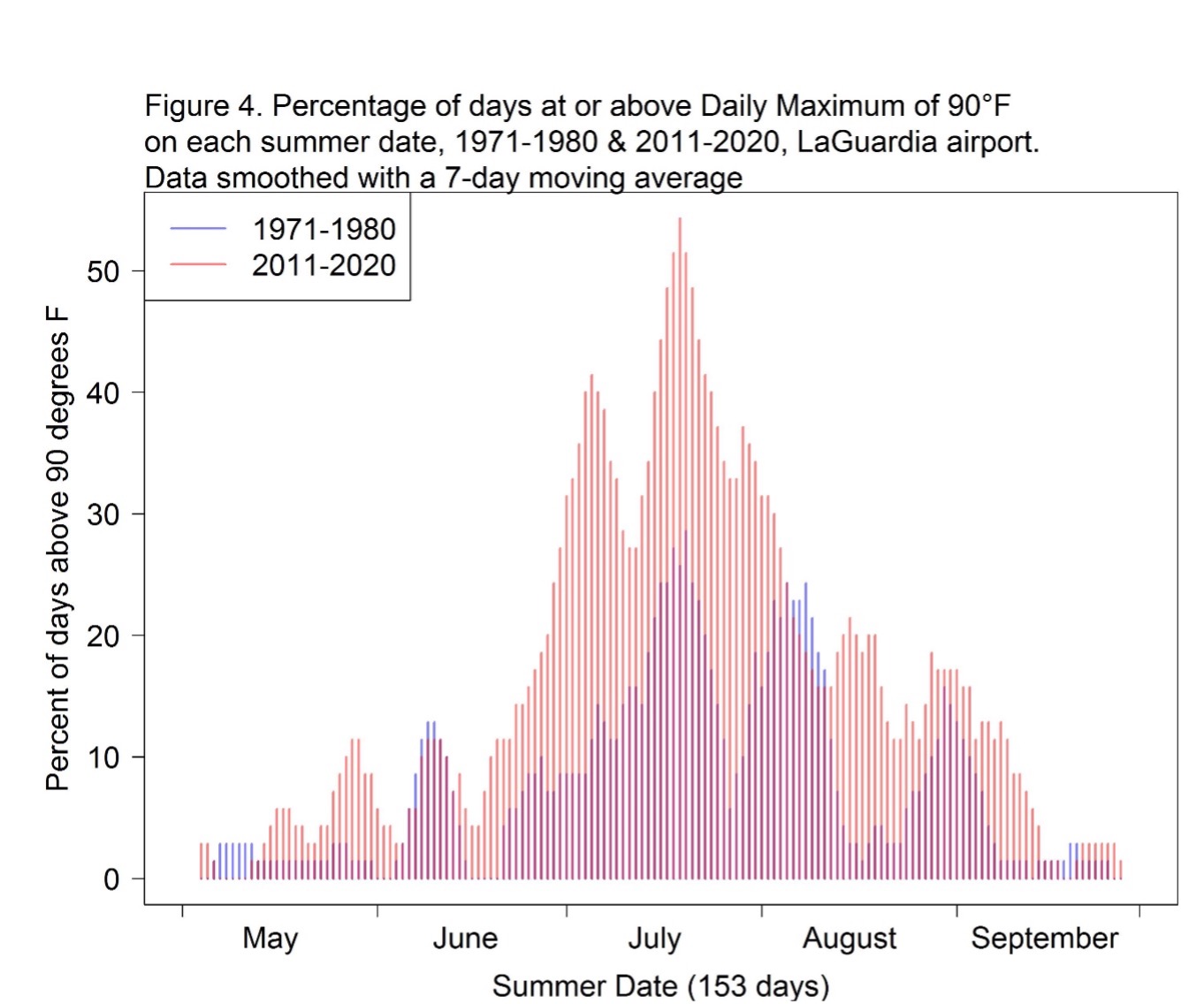 The HVI shows differences in community-level heat impacts during and shortly after extreme heat events.5 Unlike many social vulnerability indices, the HVI is derived from NYC mortality data, which means that neighborhoods with elevated risk identified by the index are those areas with elevated heat-exacerbated deaths during extreme heat events. HVI scores range from 1 (lowest risk) to 5 (highest risk). The relative heat mortality risk of each Neighborhood Tabulation Areas (NTA) an be explored here.

The HVI includes measures of surface temperature, green space, air conditioning access, percent of a neighborhood residents who are Black, as this population is the most excluded from heat resources, and the percent of people living below the federal poverty level. Inequities in community-level heat impacts stem from structural racism, which leads to neighborhood disinvestment, racist housing policies, fewer job opportunities and lower pay, and limited access to high-quality education and health care. Read more about how structural racism affects housing and public health and the history of redlining and how it impacts public health in NYC.

The best indicator of neighborhood-level heat impacts is the HVI, which shows differences in heat-exacerbated mortality risk. The number of heat stress deaths by NTA should be interpreted with caution. The NTAs are small and the number of deaths at this level is also small and unreliable, so it is difficult to conclude whether tell differences between areas are due to random fluctuation or represent a real difference in risk.

Heat contributes to the deaths of 370 New Yorkers on average each year during the warm season of May through September. The climate crisis is also making NYC's warm season hotter. To reduce heat-related deaths in NYC and prepare for a hotter future, the city needs long-lasting structural interventions alongside emergency preparedness and response, including:

Learn more about what the City is doing to mitigate the effects of heat, and how the HVI guides that work, at Cool Neighborhoods NYC. More data and information about heat, climate, and health is also available on the Health Department’s Climate and Health Hub.

Note on years of data included:

For heat-stress, data for 2020 and 2021 are considered preliminary because death data are still being compiled by the Bureau of Vital Statistics. These numbers may be updated in future reports as final data become available. 2020 heat-stress numbers are less likely to change. All heat-stress tables are based on heat-stress deaths from 2011-2020. The heat-exacerbated mortality analysis requires complete daily counts to produce accurate estimates, making 2019 the most recent available year of data.